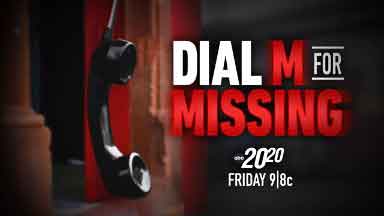 Dial M for Missing: Prior to Peter’s shocking murder of QC in 2012, the couple, Peter and Quee Choo “QC” Chadwick, appeared to lead happy lives in Newport Beach, California, with their three sons. Peter regularly appeared in court after posting bail, until he disappeared in January 2015. Years later a  mysterious ex-pat left the small town of Pátzcuaro, Mexico, after he was involved in a car accident that killed a local woman. This new  episode of “20/20” details Peter Chadwick’s five-year search by the U.S. Marshals Service and how one phone call ultimately helped locate him.

Exclusive interviews conducted by ABC News correspondent Bob Woodruff with the family of Peter’s friend Claudia Soto (who was killed in the car accident in Mexico), Adriana Segovia, Claudia’s sister, Claudia, and Esperanza Segovia, as well as other Patzuaro locals who knew Peter, are featured in the two-hour episode. Claudia Soto .

With the help of the U.S. Marshals, ABC News was able to obtain exclusive audio of Peter Chadwick discussing his time spent hiding out in Mexico as well as previously unreleased audio of the first call he made to his eldest son following his capture. Additionally, “20/20” features interviews with Newport Beach police and U.S. Marshals involved in the search, including Jen Manzella, a public information officer for the Newport Beach Police Department, who started a podcast that revived the case; California neighbours and friends of the Chadwick family; and award-winning author John Scherber, who offers perspective on living abroad.