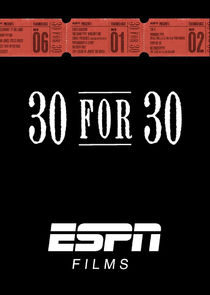 Breakaway: WNBA superstar and activist Maya Moore was one of the best basketball players in the world when she stepped away from the sport for a remarkable reason: to fight for a man she believed was wrongly imprisoned. In 2019, after four WNBA championships, two Olympic gold medals, a WNBA MVP award, three All-Star MVPs, and a scoring title, Moore decided to take a sabbatical from basketball at the age of 29 to devote herself full-time to working for the release of a man named Jonathan Irons, who was wrongly convicted of burglary and assault and sentenced to 50 years in prison

Inspired by ESPN's anniversary, ESPN Films is launching 30 for 30, an unprecedented documentary series featuring 30 of today's finest storytellers telling thirty remarkable stories from the ESPN era. On their own, each of the films will be an intimate look at a specific story, relevant to larger themes from the modern era. Collectively, these films will be a diverse mosaic of what sports has meant to American and World culture in the last thirty years. Each storyteller will bring their passion and personal point of view to their film detailing the issues, trends, athletes, teams, rivalries, games and events that transformed the sports landscape from 1979 to 2009.