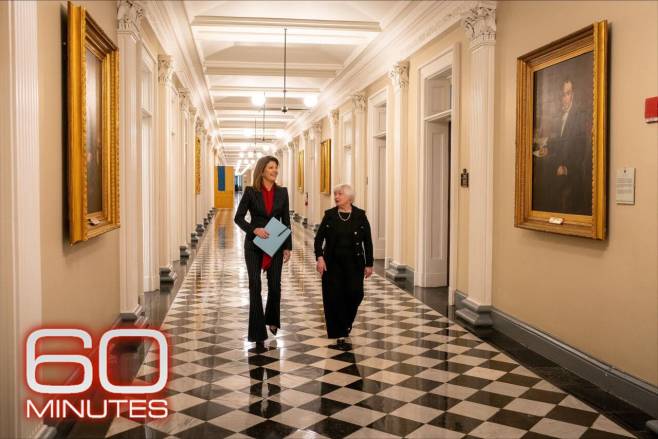 THE TREASURY SECRETARY – Janet Yellen, the secretary of the Treasury, is questioned by Norah O’Donnell about the record-high rate of inflation, the conflict in Ukraine, and whether a recession will occur in 2023. Along with the secretary, 60 MINUTES visited the Bureau of Engraving and Printing in Fort Worth to witness the first batch of US currency bearing the secretary’s signature come off the printing presses. For the first time in the nation’s nearly 250-year history, the names of two women—Secretary Yellen and U.S. Treasurer Lynn Malerba—appear on its paper money.Keith Sharman is the producer.

SUING SOCIAL MEDIA – According to Sharyn Alfonsi, recent legal actions taken against Meta, TikTok, YouTube, and Snapchat could change how social media is used in the future. More than 1,200 families are suing the big social media companies, claiming that the websites have a negative impact on their children’s mental health and, in some cases, have even resulted in the deaths of their children. Alfonsi has a conversation with the Social Media Victims Law Center’s founder and some of these families. Ashley Velie is the producer.

COLLEGE OF MAGIC – You can use magic to try, but you can’t wave a wand and make intolerance, poverty, or violence go away. Jon Wertheim goes to the College of Magic in Cape Town, South Africa, where pupils study card tricks, juggling, sleight-of-hand, and ventriloquism. Rethinking the boundaries of possibility is what the school actually teaches, which is also the great superpower of magic itself. Michael Gavshon and Nadim Roberts are the producers.