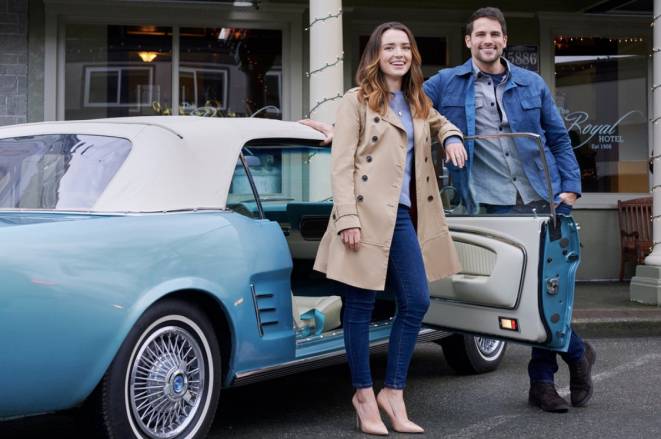 Philippa Northeast (“Home and Away,” Standing Up for Sunny) and Brant Daughtery (“Pretty Little Liars,” “The Baker’s Son”) take a cross-country road trip in “A Royal Runaway Romance,” a new, original movie premiering Saturday, April 9 (8:00 p.m. ET/PT), on Hallmark Channel, as part of the network’s “Spring into Love” programming event.

Just as Princess Amelia (Northeast) of Bundbury is preparing to take over as Queen once her mother Ava (Sarah Jane Redmond, “Siren”) steps down in a year, she finds herself falling for Wes (Andre Anthony, “Riverdale”) the American artist commissioned to paint her royal portrait.

The Queen makes it clear that she doesn’t think Wes is the right match for Amelia, so when the artist returns home to Chicago, Amelia devises another reason to travel the states – her Uncle Andreas’ (Vincent Gale, “Snowpiercer”) upcoming birthday. It’s the perfect plan…except that Andreas’ Beverly Hills home is nowhere near Chicago, and Wes isn’t able to meet her there.

Complicating matters further, her mother insists on traveling with her and confiscates her passport, making a quick flight to Chicago impossible. And perhaps the biggest hurdle is when Amelia learns that Grady (Daughtery), Andreas’ trusted bodyguard, is now assigned to stay with her at all times. Not easily deterred from her plans to see Wes, Amelia decides to “borrow” Grady’s car to drive to Chicago. When the handsome bodyguard catches onto her plan and tells her uncle, Andreas agrees to help Amelia on one condition – Grady must go with her.

Heading out with Grady in Andreas’ classic convertible, America-obsessed Amelia gets the cross-country trip she’d always dreamed of – and perhaps her last chance to be free before assuming the responsibilities of being Queen. Along the way, Amelia and Grady open up to each other and find that they have more in common and more fun together than either expected. With every state line they cross, each will learn that in road trips and romance, the destination is less important than the journey and the person you share it with.