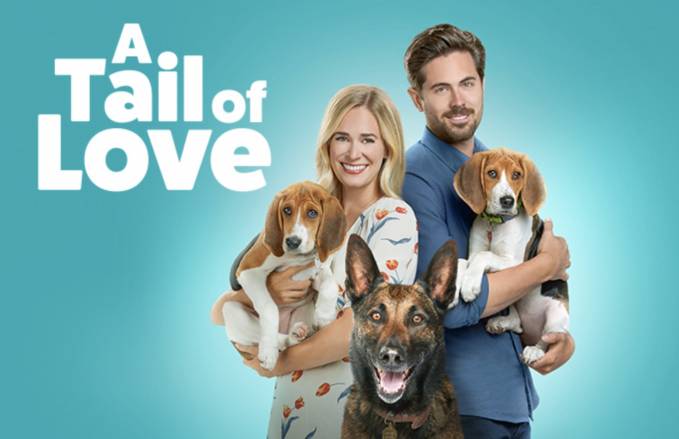 Bella (Bristow) runs a dog rescue with her grandmother Lily (Jayne Eastwood, “Workin’ Moms”), a passion project started by her late grandfather. The rescue’s future is put into question when they discover they’re losing funding from their main sponsor – a dog food company being sold following the owner’s passing. JR (McNally), the late owner’s son, is a soldier who is home on leave to handle the details of the sale. While visiting the rescue, JR quickly bonds with Indie (Moxie), a retired military dog, and continues to stop by to spend time with his new, four-legged friend.

When Bella learns that the rescue’s property is also being sold, she turns to JR for help in finding the missing document proving her grandparents purchased the land many years before.

In the process, Bella and JR become close and start to fall for each other, but JR’s upcoming return to active duty could put a halt to their budding romance.

“A Tail of Love” is a Leif Films Media production. Leif Bristow, Michael McLaughlin, Joe Want, Rick Garman, Mark Gingras and Danny Webber are executive producers. The movie is produced by Agnes Bristow and Borga Dorter. Leif Bristow directed from a teleplay by Agnes Bristow from a story by Kim Saltarski, Richard Beattie and Agnes Bristow.