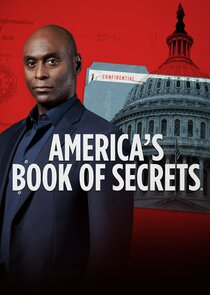 The Hunt for Hitler’s Relics: With a notorious interest in the occult, Adolph Hitler forms a Nazi organization known as the Ahnenerbe to acquire holy relics that could help him secure his proposed Thousand-Year Reich, but the Ahnenerbe’s success remains a mystery.

America's Book of Secrets on goes deeper, farther and wider than ever in its unceasing effort to bring viewers the truth behind today's most shocking headlines. From the facts behind the NSA spying scandals ("Big Brother") and the Boston Bombings ("American Terrorists") to America's secret prisons, Scientology, the Gold conspiracy and America's doomsday plans, this thought-provoking informational series features in-depth interviews with top journalists, law enforcement officials and even whistleblowers. It gets past the spin and straight to the heart of what everyone needs to know, whether the government wants you to or not.