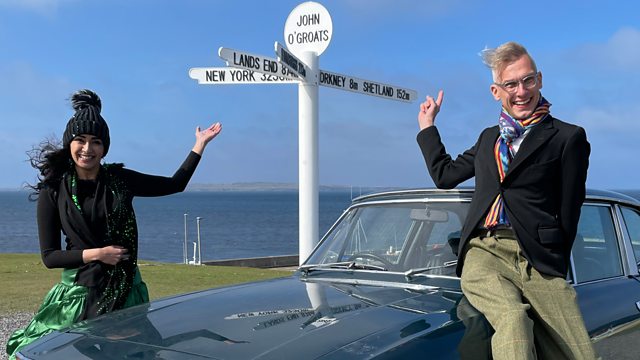 What’s happening on Antiques Road Trip Today Thursday 6 October on BBC One; On the penultimate leg of our journey through Scotland, Roo Irvine and Mark Hill are as far north as they can go. They’ve arrived in John O’Groats thanks to their 1970s car, and Scottish lass Roo is diverted from her antiques hunting as she learns how the windswept landmark came to be such a famous place.

They return from their Highlands shopping trip with a veritable bounty of old treasure. A 1950s Bakelite television proves to be a fantastic find, and some rather classy whisky glasses are a fantastic find as well. Will the Banbury bidders, however, share the experts’ enthusiasm?

In order to learn more about a troubling period in Scottish history and its effects on Highlanders, Mark takes a break from his shopping.

It’s a battle at the auction between Roo’s elaborate candelabra and Mark’s adorable teddy and stuffed lamb.