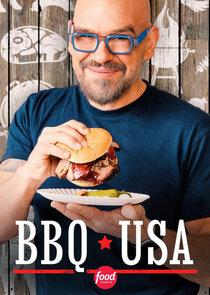 Double Trouble: Michael Symon travels to the Garden State to watch more than 40 teams compete over two days at the New Jersey Knoq-Out in Blairstown. Teams test whether competing for longer periods of time results in winning more medals by pitting a rookie against her coaches.

It’s the most competitive game in food – BBQ! And in this new series, chef and restaurateur Michael Symon is headed to the biggest BBQ competitions across the country to bring viewers right into the action as he showcases the most elite competitors and top-notch BBQ talent as they battle for the ultimate barbecue bragging rights and prizes. From Georgia to Kansas to Texas, and points in between, Michael takes viewers behind the scenes to join in all the cooking action including a look at the most diehard devotees of this culinary spectacle, and of course, the most drool-worthy, mouthwatering ‘que that you’ve ever seen!