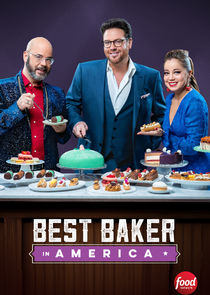 Rocky Mountain States: The competition heads west toward the Rockies as the eight bakers must feature Montana and Idaho's beloved huckleberries in their huckleberry pie-embouche pastry tower for the master challenge. In the bake-off challenge, it's time to get jiggly and honor Utah's state snack — gelatin — with a visually stunning creation containing both baked and gelatin components. Host Carla Hall and judges Gesine Prado and Jason Smith evaluate the desserts and give one baker their marching orders.

Eight of America's most elite bakers compete in the all-new primetime competition Best Baker in America. Bakers from around the country must showcase their baking skills and creativity, as they are tasked with challenges that not only test their technical proficiency, but also their ability to execute under pressure, while under the watchful eyes of the judges: Food Network Star winner Jason Smith and Food Network's Marcela Valladolid. Each episode the competitors must compete in two difficult rounds, including a Skills Challenge that tests their mastery of the essential technical skills of baking, followed by a Master Challenge that tests their prowess in working with specific flavors and ingredients to create the most authentic and delicious versions of classic baked delights. In the end, the judges help determine which baker moves one step closer to winning $25,000 and earning the title of Best Baker in America!