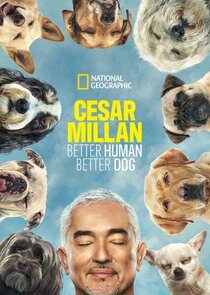 One Brick at a Time: Cesar comes to the aid of a 68-year-old recently retired woman, Judy, whose over-excited Australian kelpie, Shadow, has ruined her retirement and has developed a strange fixation with bricks. After several attempts to train and correct both the dog and Judy's behavior, Cesar is able to transform them both, making for one of the most rewarding transformations in Cesar's career.

As humans face a world never seen before, they have turned to four-legged friends as a way to console, bringing harmony and peace to their homes. In fact, dog adoptions are hitting record highs over the past year, with some cities reporting a 90% rise in adoption rates. However, with great power comes great responsibility, and sometimes more pooches can cause more problems. Many rescue dogs can come from a troubled past resulting in unknown trust issues, which can be difficult for new owners. Cesar Millan: Better Human Better Dog showcases Cesar Millan as he takes on the most challenging cases yet, treating a host of new canine behavioral issues impacted by well-intentioned but impulsive owners.