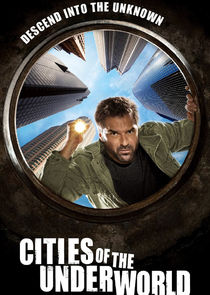 Secrets of the Ancient Metropolis: Don Wildman ventures through an assortment of massive underground cities in Turkey that could have been the birth of human civilization on Earth.

Skyscrapers loom overhead, taxis honk their horns and street vendors shout as they peddle their wares. But the buzz of the city above is nothing compared to the powerful pull of the past and the amazing secrets simmering just beneath one’s feet! We travelled hundreds of feet beneath the pavement to reveal hidden worlds that literally make up the foundations of today’s greatest cities.

Engineers, architects, and archaeologists leave the metropolitan chaos behind to travel deep beneath the city streets into the meandering tunnels, abandoned subway lines, hidden water supplies, dank dungeons, eerie tombs, clandestine hideouts, and forgotten cities that have been lost to the hands of time (or purposely hidden for more sinister reasons…).

Combining the stunning visuals of high definition video and state of the art computer graphics, Cities of the Underworld turns history upside-down. The construction and engineering of subterranean structures are brought to life and detail how a modern city miraculously doesn’t collapse onto the one below. Whether it is Rome, London, Paris or New York these vibrant cities teeming with life, not roped off excavation sites deep in the desert.