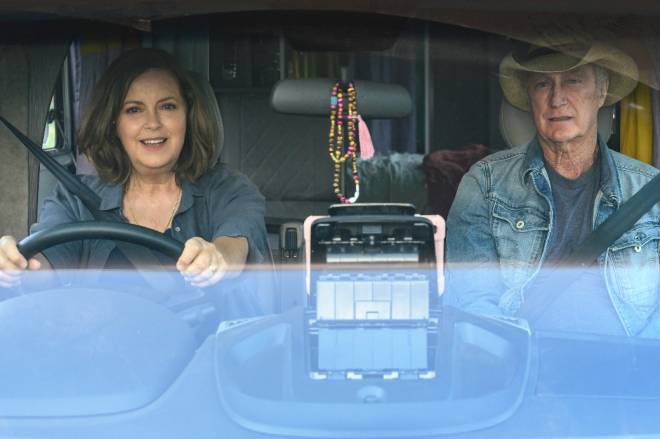 While recently widowed English nurse Joan Kirkhope (Scacchi) is on a reluctant pilgrimage to uncover the truth about her husband’s mysterious death, retired Australian homicide detective Jack Darby (Brown) has hit the open road with his dog Diesel to flee his past. The low-key, ruggedly charming Australian and the tightly wound Englishwoman couldn’t be more dissimilar, but when they cross paths in the Australian outback and become involved in a number of unexpected mysteries, this unlikely detective team quickly realises that the most intriguing mystery they must solve is themselves.

Exploring the world of the real-life phenomenon of “grey nomads” – retirees who leave behind their comfortable homes to set out for adventure on the endless roads of Australia – Darby and Joan shines a light on fascinating and often unseen areas of the continent from isolated, sweeping coastlines to lush hinterland, to small communities in the Outback and a myriad of fascinating characters moving through a world where everyone seems to be searching for something – or trying to escape it. Danger and secrets lurk for those who bother to look.

The series’ creators are Glenys Rowe and Phillip Gwynne, and its writers are Paul Bennett, Keith Thompson, Andrew Anastasios, Giula Sandler, David Hannam, Adam Zwar, Beck Cole and Ainslie Clouston. The set-up director is David Caesar and the directors are Ben C. Lucas, Mairi Cameron and Jo O’Shaughnessy. The series is produced by CJZ, with major production investment from Screen Australia in association with Screen Queensland.

There will be two episodes arriving weekly on Mondays from August 8 on Acorn TV.