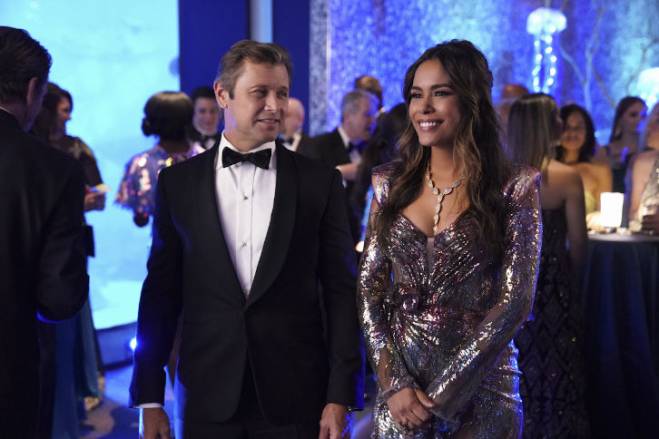 Guilt Trip To Alaska: On the eve of the Carrington Foundation Fundraiser, drama immediately floods the scene as bodies are pulled from the lake on the Carrington Estate. As reporters and detectives move in, Blake (Grant Show), Fallon (Elizabeth Gillies), Cristal (Daniella Alonso), Adam (Sam Underwood), and Anders (Alan Dale) realize they need to get their stories straight very quickly. Dominique Deveraux (Michael Michele) focuses on her missing son, while Michael Culhane (Robert Christopher Riley) tries to prove that he’s been framed…from behind bars. Sam (Rafael De La Fuente) plays comforting friend to both Fallon and Kirby as he continues to work on the hotel.

Fallon visits a comatose Liam (Adam Huber) in the hospital and finds herself haunted by Trixie’s death in unexpected ways. Kirby (Maddison Brown) visits Culhane in the slammer and returns to Carrington Manor to find she is no longer welcome. Dominique tries to steal the spotlight at the Fundraiser, Fallon becomes charitable, and Blake loses something incredibly valuable.

Josh Reims wrote the episode which was directed by Michael Allowitz

Mythic Quest: Raven’s Banquet follows a team of video game developers as they navigate the challenges of running a popular...