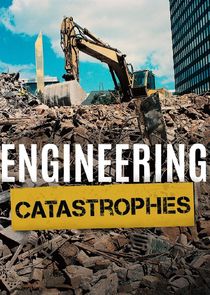 In Memphis, a crucial interstate crossing over the Mississippi River was found to be in imminent danger of collapsing; experts used the most recent scientific advancements to investigate and discovered seriously damaged load-bearing tension members with a potentially fatal weakness.

Wednesday December 7 at 21:00 on Science

Engineering Catastrophes will profile, investigate, analyze, and find solutions for the world’s most unbelievable engineering gaffes. From the hilarious to the mind-boggling, from the deadly to the bank-busting, this series showcases some of the most outrageous structural disasters and the genius resolutions to get things back on track. Blunders explored this season include a waterfront building in England that has created a wind tunnel so strong, pedestrians have been blown over; the Carrier Dome in snowy Syracuse that has a soft top roof requiring workers to climb atop with hot water hoses to prevent collapse every time snow falls; a Brazilian highway that is so close to tall buildings that neighborhood residents are concerned about hearing loss.