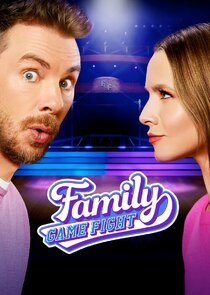 The Alongi Family vs. The Lam Family: Hosts Kristen Bell and Dax Shepard are "adopted" into a family of four to compete in a series of fun-filled and larger-than-life games. The competing families play "Pie Rollers," "Fruit Flies," "Taste Buds," "Deep Dish Dash" and "Brain Freeze." The winning family moves on to play "Spin Cycle" for a chance to win $100,000.