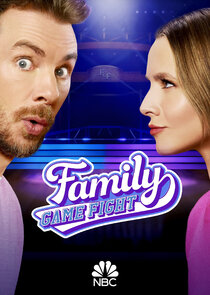 The Kosturos Family vs. The Extinguishers: Hosts Kristen Bell and Dax Shepard are adopted into families to compete in the fun-filled, larger-than-life games Helium Hoops, Between the Sheets, Air Heads and more; the winning family plays Spin Cycle for a chance to win $100,000.