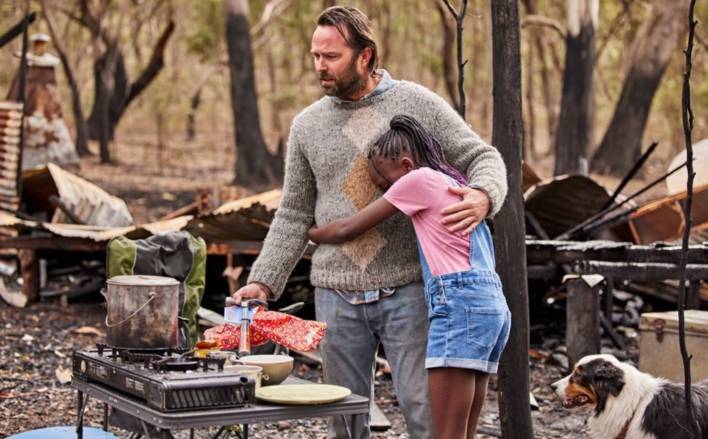 It’s New Year’s Eve. The usually picturesque beach holiday town looks like a war zone. As day turns to night, then the sky turns blood-red, people rush to the water’s edge for safety – huddling on the beach and wharf, like refugees in their own country.

A local hermit, Doug (Sullivan Stapleton), sacrifices his own home to help a young South Sudanese girl, Adut (Ameshol Ajang), who is separated from her parents in the panic and crush. A teenage boy, Jai (Stacy Clausen), is confronted by the human cost of the natural disaster when he tries to help a man trapped by fire. The stories are held together by a community radio announcer – a widow, Caris (Noni Hazelhurst), who is the last link people have to know what’s happening as the fire approaches.

We flash forward to February – when the rains have come, and the fires are finally extinguished – to see the emotional aftermath for the characters in this episode and glimpse the characters we have met through the series. And through their stories, where hope for the future might lie.

Production credits: The series is produced by Tony Ayres Productions (TAP), which is backed by NBCUniversal International Studios and Matchbox Pictures, for the ABC. Major production investment from Screen Australia in association with ABC, with support from Film Victoria through the Victorian Screen Incentive and Regional Location Assistance Fund. Distribution is handled by NBCUniversal Global Distribution. ABC Executive Producers: Sally Riley and Brett Sleigh.