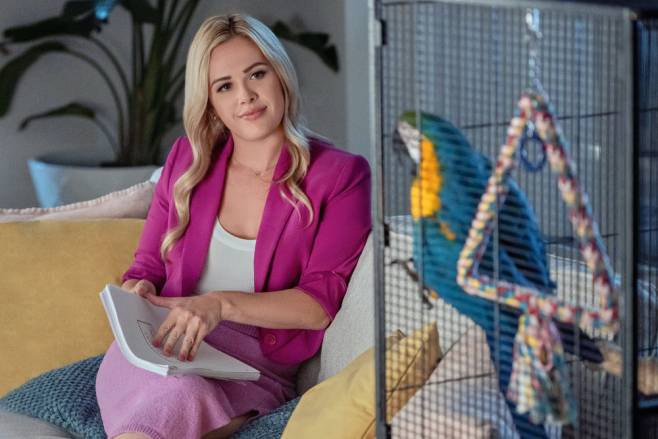 In Fly Away With Me, Angie (Hall) is a stressed-out aspiring writer who recently got her own apartment. A parrot enters through her balcony door on the first day in her new home. She doesn’t know who the bird’s owner is, but she is aware that animals are not permitted inside the structure. She meets Ted (Mooney), an air traffic controller who not only lives in her building but also occupies the unit next door, while she is at the neighbourhood pet store.

Angie quickly learns that Ted is hiding Zoe, his sister’s dog, as a pet of his own. It then turns into a comical back-and-forth as Ted tries to hide Zoe and Angie tries to hide the bird. As they team up to avoid their condo manager Gineen (Melinda Michael, “Fit For a Prince”), Angie and Ted agree to have each other’s backs.

Sadly, Angie’s hopes are dashed one day when the parrot escapes and lands on Gineen, who promptly kicks her out. Angie is left feeling heartbroken because she thinks Ted never really had her back, but then she learns something unexpected and exciting.

“Fly Away With Me” is from Johnson Production Group. Timothy O. Johnson and Andrew C. Erin are executive producers. Joseph Wilka serves as co-producer and Oliver De Caigny is supervising producer. Marita Jane Grabiak directed from a script by Barbara Kymlicka.