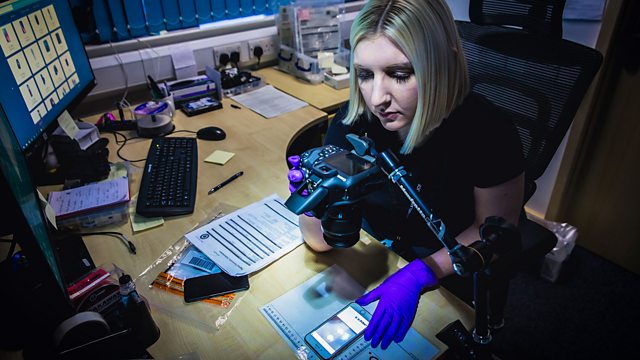 Killer in the Car Park: Police respond to a call of a shooting in a carpark. As dusk sets in, crime-scene coordinator Simon Flanaghan attends to find a car set back from the road, with multiple bullet holes and two men dead inside.

A specialist ballistics team is called in to establish how many shooters were involved and where the gun was fired from. Meanwhile, homicide detectives from West Midlands Police work to establish a prime suspect and secure warrants to locate and arrest him.

Continuing to investigate the suspect’s movements after the incident, detective Lisa Shepherd follows a trail of digital evidence following the suspected getaway vehicle to a shopping centre in Birmingham.

As police attempt to recover CCTV footage from the shopping centre car park for forensic examination, an employee says he saw the suspect on the day of the incident. In a dramatic turn, he becomes central to their investigation.

Digital, DNA and ballistic forensics combine with forensic accounting to paint a detailed picture of the murder and suggest a surprising motive. But will the evidence be enough to bring the killer to justice?