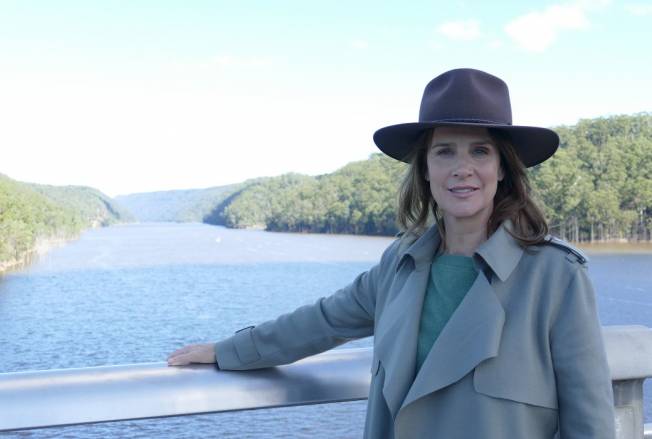 Great Southern Landscapes follows art lover and actor Rachel Griffiths as she explores Australia’s most iconic landscapes and the untold personal, social and cultural stories behind them. In tonights episode, Rachel travels to the Hawkesbury River to find the exact spot where Arthur Streeton painted his 1896 masterpiece.

In this stunningly visual episode, art lover Rachel Griffiths travels to the Hawkesbury River to find the exact spot where Arthur Streeton painted his 1896 masterpiece, The Purple Noon’s Transparent Might.

Along the way, she gate-crashes a masterclass of modern-day Streeton-ites and armed with paint brushes and an easel, Rachel channels her inner Streeton in the very room at the Victorian Artists Society where the young artist made his magic alongside fellow Impressionists Fredrick McCubbin and Tom Roberts.

While in Melbourne, she eyeballs the original at the National Gallery of Victoria and learns how one curator spent his lockdown returning the painting to its former glory after 100 years of “cigar smoke”!

In Sydney, she visits Bradley’s Head, discovering that Streeton was ahead of the curve – an early environmentalist who painted a protest painting, Cremorne Pastoral, in 1895 in a bid to prevent a coal mine being opened on Sydney Harbour.

And then it’s off to the Hawkesbury, where Rachel meets a flood victim whose love affair with the river is at breaking point.

She then jumps in a tinny to learn how the First Nations Darug people have co-existed with its waterways for millennia, how early settlers were warned about the floods and how the river’s traditional name, Dyarubbin, is making a long overdue comeback.