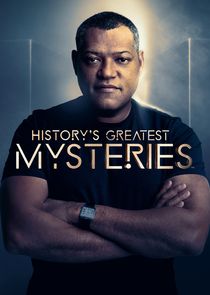 Hunting Hitler’s U-Boats: An investigation into the unshakable claims of Roger Miklos, one of America’s most eccentric, controversial, and accomplished treasure hunters. Decades before his death in 2018, Roger believed he discovered a modified Nazi U-boat loaded with a fortune in artwork, antiquities, and gold off the coast of Turks and Caicos. Before he passed, Roger gave an exclusive interview that revealed clues about the possible position of the U-boat and left behind a trove of documents, maps, and photographs. Now, armed with this evidence, celebrated diver Mike Fletcher and his team will take to the high seas in search of the special U-boat.

History’s Greatest Mysteries will investigate a wide range of historically compelling topics and the mysteries surrounding each including the Titanic, D.B. Cooper, Roswell, John Wilkes Booth, and more. Each program within the franchise will showcase fresh, new evidence and perspectives including never-before-released documents to the general public, personal diaries and DNA evidence to unearth brand-new information about these infamous and enigmatic chapters in history.