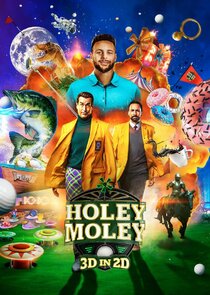 No Apparent Fear of Death: As pro-golfers and the media continue to question Stephen Curry's decision to take mini-golf pro, a new crop of players are ready to putt their hearts out. The passion is in the air as two players face off on Holey Matrimony, and later, a psychic goes up against a basketball mentor on the Agony of Defeat. From the ski slopes, we head to Turfing USA and later, we're back to the arctic, where the first contestant of the season survives the North Pole's Ho Ho Hole. In the end, only one competitor will joust their way to victory on King Parthur's Court, receive the iconic "Holey Moley" plaid jacket and golden putter, and return to the course in the season finale to compete for the $250,000 prize.