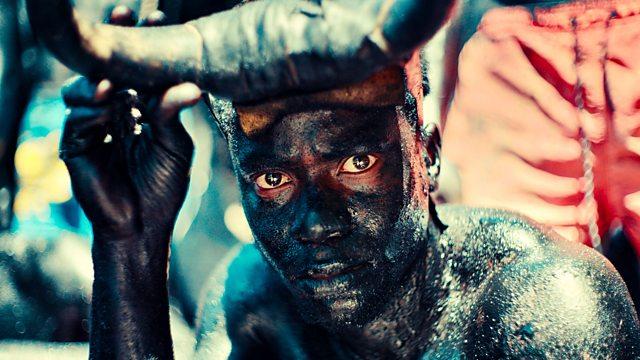 A People’s History of Haiti in Six Chapters: A visually stunning feature documentary that follows several carnival performers before and during the annual Jacmel Mardi Gras while also telling the rich history of Haiti. The performers share stories from their own lives as well as those of the carnival characters they portray, who stand in for events and people from Haiti’s distant and recent past. To further our understanding of Haitian history and culture from the time of the native Taino through the present, archive material drawn from a wide range of sources is woven throughout the interviews, testimonies, and observational footage. This is a celebration of rebellion and resistance that has reverberated throughout history rather than the sequins and sound systems found at other Caribbean carnivals.

During Carnival, or “Kanaval” in Haitian Kreyol, drama and costumes are used to enact the lives of the native Taino Indians, the Slaves’ Revolt of 1791, the founding of Haiti as the first Black republic in the western hemisphere in 1804, the debt that the French forced Haiti to take on, and more recently, state corruption. The Lanse Kd are hordes of behorned, shirtless men with skin shining with an oily patina of cane spirit, syrup, and charcoal who rage through the streets with ropes in hand before diving communally into the ocean at the end of the day. The Zel Maturin are satin-clad devils in papier-mâché masks with four-foot hinged wooden wings that they smack together dangerously. However, there are also lone, eccentric performers who use their character and costume to enact deeply personal spiritual visions. One such performer is Bounda pa Bounda, who acts out a Vodou vision that he received from spirits in a dream.

Kanaval is when people take control of history and shape it however they see fit.