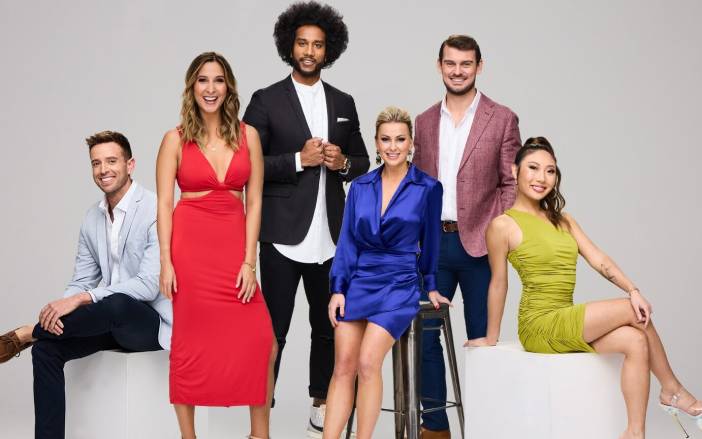 Love Triangle, from the creators of Married At First Sight, asks a group of singles to let go of their notions of what their ideal partner should resemble and instead make a decision without having met them in person.

As they get to know one another, they will be able to text and call their potential matches, but until they choose one and go on their first blind date, neither of them—nor the audience—will know what the other looks like.

Will they like what they see when they first meet? This decision will determine everything. Can they overcome a lack of attraction to forge a true connection if they don’t?

After these first dates, things will really heat up when the newly formed couples move in together and embark on an explosive and highly unpredictable love-and-heartbreak-filled relationship journey that will rock the couples to their very core.

A down-to-earth tradie from Townsville working in his family business, Kyle was in a long-term relationship throughout his 20s while his mates partied, so he’s no stranger to the tools that make a relationship tick.

Now 30 and single, the tables have turned in his social circle. Kyle’s friends have mostly settled down and he feels left behind.

While his dry humour isn’t for everyone, finding a partner that understands him and his quirks will be the recipe for relationship success for Kyle.

Single for ten years, Lisa’s last serious relationship ended when she was 23.

Lisa doesn’t have time to waste on people who do not share the same relationship goals as her – children and marriage.

Forthright, funny, and honest, Lisa has a love-hate relationship with modern dating. She’s picky and prefers to meet in person.

She also seeks a partner who shares her values and is a good communicator – and a strong sex drive is also a must!

Yannick is charming, ambitious and confident.

Born in Australia with a Sri Lankan, Portuguese and French background, ‘Yan’ describes himself as a ‘walking Tinder’, having no difficulty meeting girls, and as such is not on any dating apps.

Well-travelled and focused on his work in sports management, Yan is extremely close with his family, and is looking for something serious after being single for the past year.

Madi is vibrant, outgoing, and has big energy – but she’s sick and tired of being the life of the party who goes home alone. Having focused on her career, Madi finds herself extremely busy with work, leaving little time for dating.

Charming and loveable, Madi knows how to make friends – but has remained unlucky in love.

Having hit and miss experiences on dating apps has left Madi with her walls up and she knows it will be a struggle for her – and a new romantic partner – to bring them down.

With ‘McSteamy’ good looks, Alex is single for the first time in ten years after his first marriage broke down. Looking to find love again, Alex finds the new world of modern dating confronting.

He’s a Mr Nice Guy – and Alex knows how to be in a relationship.

A sensitive gentleman, he longs for a partner to again share the small things in life with. Alex wants to enjoy the courting stage; he wants to get it right and not jeopardise finding ‘The One’, and wants his next relationship to be his last.

Australian-born Vietnamese, Ly is a funny, petite, playful pocket rocket – a ray of sunshine! The youngest of five girls, Ly finds it tough to juggle her family’s traditional values with the world of modern dating she finds herself in.

Spending her days as a counsellor listening to others’ relationship problems, Ly wants someone to come home to and share her days with – a partner who is also her best friend.

Usually dating Asian guys, Ly is open to the process of being paired with someone new – but she knows it will be a challenge to step outside of her comfort zone.