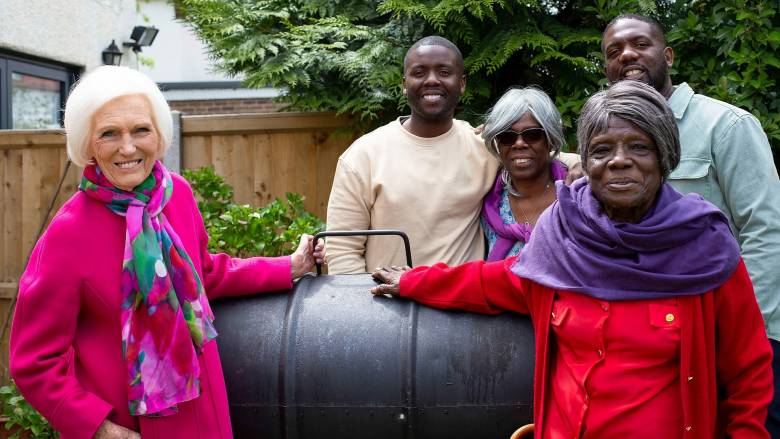 Mary has spent most of her life teaching new cooks foolproof recipes. She shows us recipes that will build confidence in the kitchen, including an easy stir-fry hoisin chicken, a mouthwatering salmon and dill burger that even the most inexperienced cooks can master, and the secrets behind her best ginger biscuits. But she starts with a delectable Victoria sponge sandwich, filled with jam and topped with cream.

Mary is not alone in her desire to get people cooking. In Newcastle, she meets the Men’s Pie Club, a group set up to combat male social isolation. With beautiful views over the River Tyne, the group meet at Newcastle Castle to impress Mary with their spiced chicken and apricot tagine pie. This groundbreaking group, which has around 120 local members, has ignited a spark for cooking and helped the men surround themselves with like-minded people who care.

In south London, Mary meets brothers Shaun and Craig McAnuff, successful food bloggers whose passion lies in bringing delicious, authentic Caribbean recipes to life. Original Flava was inspired by their mother Blossom, their grandmother Lurleen and the family recipes they grew up cooking and eating. Dedicated to passing on these recipes, they show their cousins how to make jerk chicken on a traditional jerk pan made from an old oil drum, before Mary pops in to join the celebrations at the family BBQ.

Mary also reveals some of her favourite kitchen shortcuts, perfect for beginners but just as useful to those with a bit more experience under their belt.

Queen of the kitchen Mary Berry loves to create dishes to tantalise the taste buds. She explores new ideas with kindred spirits who share their own remarkable foodie passions.