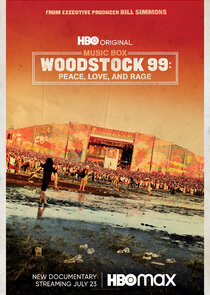 Woodstock 99: Peace, Love, and Rage unfolds over three blazing hot days and nights of nonstop performances and heaving mosh pits in July 1999, and examines how the festival eventually collapsed under the weight of its own misguided ambition. The musical lineup reflected acts that dominated MTV and radio airwaves at the time and leaned heavily towards artists catering to a young, male demographic. Intense heat, lack of adequate sanitation and access to free drinking water agitated a crowd already at a breaking point. Shortcuts and cost-cutting measures had diminished security, allowing the anger and frustration of the mob to explode into unchecked rioting and destruction. As much as Woodstock 69 became known as a celebration of peace and inclusion, Woodstock 99 became a flashpoint for burgeoning white toxic masculinity.

Music Box is a collection of documentary films exploring pivotal moments in the music world.