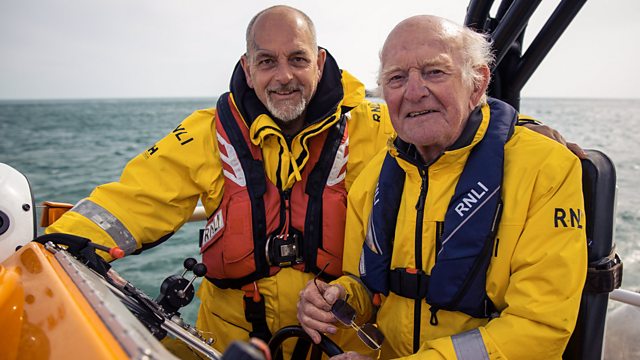 Rescuing Dad: When a sudden stroke robbed Dai Chant of some of his most precious memories, his son set out to restore them

Dai Chant was the legendary coxswain of the St Davids lifeboat. It is 30 years since he last went to sea. When the stroke hit him, his son Mike noticed that objects connected to the sea stirred up old memories in his dad. Determined to restore his father’s memory, Mike began to take his dad to key places in his life, including an emotional visit to the lifeboat station Dai had not entered for three decades. Gradually, memories began to return, but one was missing.

On 26 February 1989, a fishing boat, the Stephanie Jane, lost control close to the rocks beneath the Bishop Rock lighthouse. Dai and his crew put to sea facing a force 12 gale and 30 foot waves and succeeded in bringing her safely into Milford Haven harbour. Later, Dai received a medal for bravery from the RNLI.

Mike and his brother Will arrange to take Dai on a lifeboat, back to sea for the first time in three decades. It’s an emotional experience, topped only by the news that both of his sons have been appointed as professional lifeboat crew members at St Davids – following in their father’s footsteps.