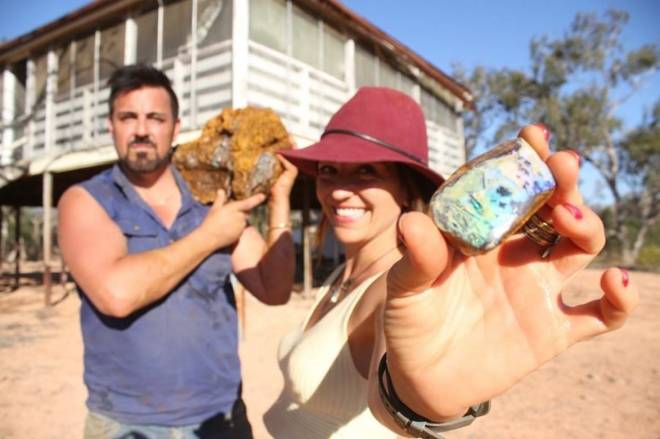 There’s one million reason to watch the brand new season of Outback Opal Hunters on Discovery.

The 12-part series launches Thursday, 24th February at 8.30pm AEDT on Discovery, and follows nine opal-hungry teams, across three states, in their battle to find a fortune hidden under Australia’s harsh and remote desert landscapes.

Season eight of Outback Opal Hunters witnesses the rise of a new generation of opal miners. The quest to find opal is gruelling work and there’s no shortage of blood, sweat and tears. For the crews it means life off the grid and surviving the searing Aussie heat.

As the old guard of grizzled veterans like the Bushmen are pushed to breaking point in search of the queen of gems, untested young bloods take up the challenge.

This season sees the introduction of the Mooka Boys (Leif, Cozza and Matt) – a team who embraces the Mad Max lifestyle of the Australia Outback; operating from a modified old school bus.  Team leader Leif also relies on his late father’s “Opal Bible” to find hotspots to mine for the elusive rainbow gem.

The Mooka Boys join season eight, battling against the apocalyptic outback alongside rookie outfit the Misfits and thick as thieves family teams the Tarantos, Blacklighters and Opals Whisperers.

This season, prototype machines and untested mining methods face off against the soul-destroying Australian elements. Epic dust storms, overwhelming floods and insufferable heat will take each team to the brink, as they desperately pry free every precious speck of the rainbow gem from the depths of the earth.

The Young Guns are torn from their comfort zones and dumped into unfamiliar opal fields, the Cheals battle to claw their way back from the edge of ruin, and the Bishop strives to fulfil his sacred mission.

Relationships break as bad machinery, and even worse decisions strip cash reserves to the bone. The opal is rarer, the buyers more brutal. This season only the toughest and most cunning opal hunters will survive.

Outback Opal Hunters is produced by Prospero Productions for Discovery.