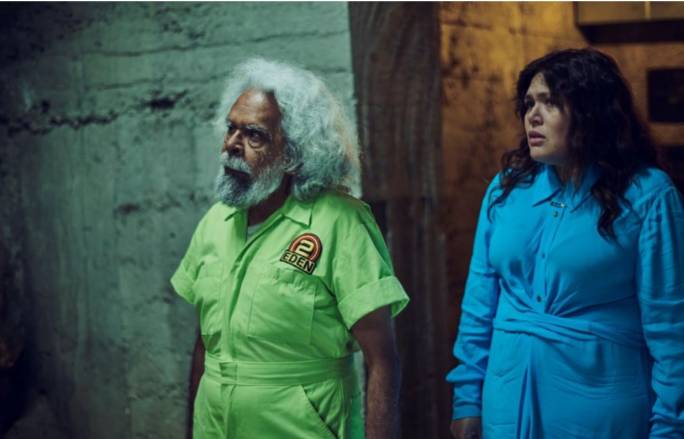 Charlie accidentally locks the preppers in the Eden 2 bunker, and they must decide who should be sacrificed to ensure enough air remains for the group.

It’s a big day for Eden 2 – the bunker is almost complete! The rest of the preppers are excitedly donning their lime green Eden 2 boilersuits, but Charlie (Nakkiah Lui) is not interested. It’s cult stuff. Monty (Jack Charles) gathers the preppers for a group photo outside the Eden 2 bunker but Charlie’s new emotional support chicken, Cluck Norris, spoils the shot.

Guy (Meyne Wyatt) is drawn to the bunker, he wants a top bunk, but Monty’s instructions are clear. No one is to enter the bunker until it is complete. It doesn’t take long for the entire gang to convince one another it’s a stellar idea and down they go.

After immediately breaking one of the bunk beds, Guy is busted by Monty, who explains that he asked them not to come down into the bunker because the door lock is broken. Not a problem, says Guy, Charlie’s still upstairs. At that moment, Charlie is chased into the bunker by the plucky Cluck Norris and knocks the paint can holding the door open out of the way They’re all trapped. What’s worse,
Monty hasn’t finished installing the carbon filters in the air filtration system, so they have a limited air supply.

Jayden (Aaron McGrath) goes into full panic attack mode – he always knew the life expectancy of Aboriginal people was low but he’s too young to die! Guy’s using up too much oxygen with his over exertion as he tries to break open the bunker door, and Kelly (Ursula Yovich) and Lionel (Chum Ehelepola) try singing to God to save them.