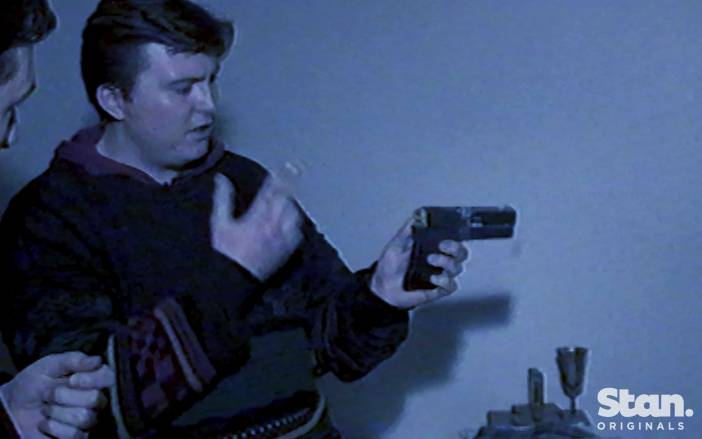 Stan have announced that the Stan Original Documentary Revealed: No Mercy, No Remorse will premiere exclusively on Stan on Thursday, June 23.

Stan’s groundbreaking documentary slate continues with Revealed: No Mercy, No Remorse. Amongst Us – Neo Nazi Australia is revealed.

Directed and produced by Terry Carlyon (The Brotherhood, Conviction) the feature documentary, formerly titled The Price of Hate, is a forensic examination of the ‘Frankston Serial Killer’ Paul Charles Denyer, reported by The Age’s veteran crime reporter John Silvester.

In 1993, 21-year old Paul Charles Denyer murdered three women in Frankston, Melbourne across a seven-week period: 18-year-old Elizabeth Stevens, 22-year-old Deborah Fream, and 17-year-old Natalie Russell. Denyer is currently serving three life sentences for the Frankston murders but will be eligible for parole in June 2023. Despite murdering three women, he could be allowed to return to the community he once terrorised.

Revealed: No Mercy, No Remorse includes the police tapes from Denyer’s interrogation, as detectives work tirelessly through the night to unravel Denyer’s version of events. It took more than 1500 questions by lead investigator, Detective Senior Sergeant Rod Wilson, and his team to break Denyer’s story – an interview still considered to be a murder interrogation masterclass.

Viewers will witness the breakthrough that helped detectives secure a confession. For the first time, the detectives who investigated the 1993 Frankston murders will speak about the case and how they captured Paul Charles Denyer.

“Delving into one of Australia’s most notorious serial killer cases, Revealed: No Mercy, No Remorse expands on Stan’s landmark investigatory documentary slate. The harrowing impact of these murders is still felt almost thirty years later, and this documentary will uncover the tireless work of the detectives who captured Paul Charles Denyer in 1993. Developed in collaboration with director Terry Carlyon and veteran reporter John Silvester, we look forward to sharing this next instalment of the Revealed slate in June.”

“The pressure on detectives tracking a serial killer is immense, for they know the offender will continue to strike until caught. In Revealed: No Mercy, No Remorse, those directly involved, from the police who pursued him to the judge who sentenced him, relive the time a then-unknown Paul Charles Denyer was discovered to be the man who found pleasure in killing. When Denyer realises during the methodical interview that he is trapped, he enthusiastically confesses as if proud of what he has done. For the victims there was no mercy, and for the killer, no remorse.”

Revealed: No Mercy, No Remorse explores the psychology of the serial killer, whose power to create fear in a community is magnified by the fact that he can live undetected in that community, often for years. The greatest danger of a serial killer is the camouflage that lets him masquerade as one of us. Serial murder has little to do, personally, with the victims – it is all about the killer and his motive will usually only be apparent once he has been caught.

Stan’s original documentary slate Revealed is created in collaboration with award-winning journalists, filmmakers and philanthropists from Australia and around the world. Revealed began with the premiere of the feature documentary Revealed: Amongst Us – Neo Nazi Australia, an eye-opening investigation exploring the terrifying rise of neo Nazi activity in Australia.

The Stan Original Documentary Revealed: No Mercy, No Remorse is produced by Stan with financial assistance from VicScreen.

The Stan Original Documentary Revealed: No Mercy, No Remorse will premiere 23 June only on Stan.