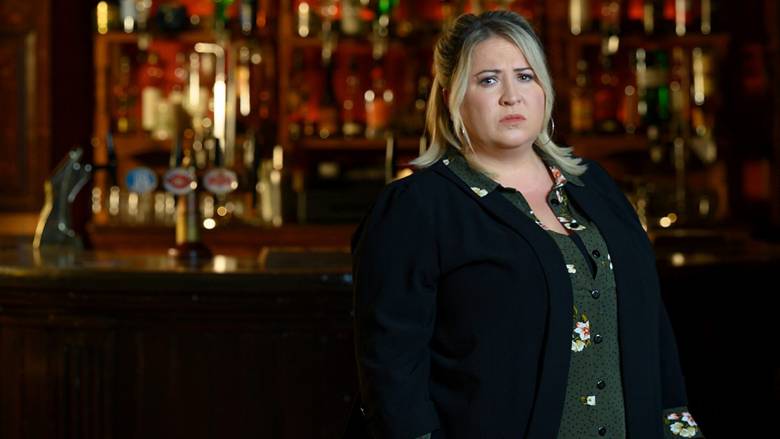 This week in Shieldinch… Ellie puts her future first when Caitlin refuses to forgive and forget; Rebecca chooses an inopportune moment to confess her feelings for Angus; and while Bob meddles in Roisin’s love life, Lou desires a fresh start.

After their heated argument, Ellie tries to move forward with Caitlin but an amicable resolution proves elusive. Lost and feeling alone, Ellie turns to Roisin who urges her to stand by her actions. With cracks in the McLean family showing no signs of easing, Ellie decides it’s time to think about her future for once and looks into undergoing IVF to realise her dreams of motherhood.

However, after seeking sage advice from Kim, Ellie stuns ex-partner AJ with an unusual request, provoking further outrage from Caitlin.

Elsewhere, after a heart-to-heart with Suzie, Rebecca realises she still has feelings for Angus.

Affairs of the heart stall when Rebecca discovers Angus is going on a date. Sensing her sadness, Bob urges Rebecca to tell Angus how she really feels – before it’s too late. Determined to get her man, Rebecca gate crashes Angus’s date to declare her love -a very awkward affair for all.

Bob excitedly prepares to go out with Roisin as pals but jealously rears its ugly head when he spots her flirting with Sonny. Desperate to remove any potential love rival, Bob plays dirty and bad mouths Sonny to Roisin – forcing him to realise he wants her all to himself.

Lou faces an uncertain future as she tries to find a new place to live. Until a surprising offer is made by an unexpected would-be flatmate.