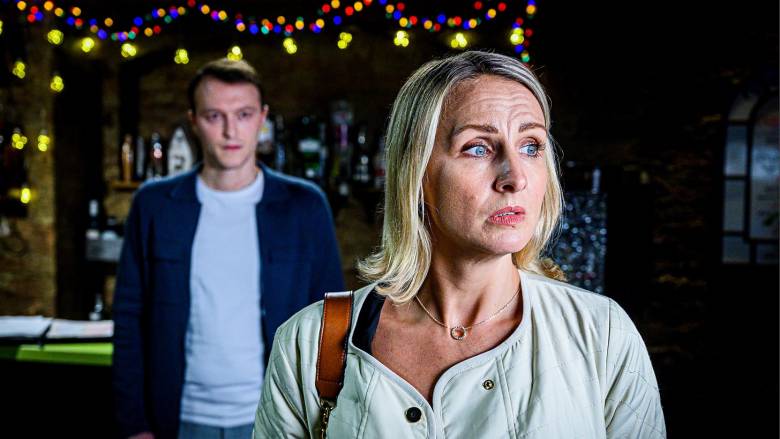 This week in Shieldinch… Karen is forced to use her wits to uncover Lenny’s secrets as Darren piles on the pressure; Ellie finds a new friendship when Caitlin refuses to support her IVF treatment; and while Angus and Rebecca face an uncertain future, Suzie is charmed by a new arrival.

Under pressure from Darren, Karen spots an opportunity to delve into Lenny’s personal life, orchestrating a meeting with his friend and confidant, Father Mick Mulvaney. Pretending that she needs advice, Karen lures Mick into talking to her. However, when he’s not looking, Karen uncovers some interesting texts on Mick’s phone. She feeds her discovery back to Darren, who tells Karen he needs more.

As Karen grows increasingly desperate, her relationship with Jessie suffers. Worse still, her suspicious behaviour is quietly noted by Lenny.

Elsewhere, at the IVF clinic, Ellie discusses her options with her doctor – but it’s clear she’s struggling with the prospect of going through this experience alone.

Back at the Tall Ship, Ash encourages Caitlin to talk to Ellie. However, Caitlin can’t get over her anger that John’s money is being used for Ellie’s IVF treatment. With no resolution between the sisters likely, Ellie confides in Roisin, who offers emotional support when she needs it most.

After her disastrous declaration of love Rebecca dreads seeing Angus again. At the garage, Bob hatches a plan to make Angus face up to his feelings, but it backfires badly.

Suzie tells Bernie they need an entrepreneur willing to invest in their fundraising plans and is thrilled when a charming stranger – Duncan Campbell Baxter – shows interest in her vision.