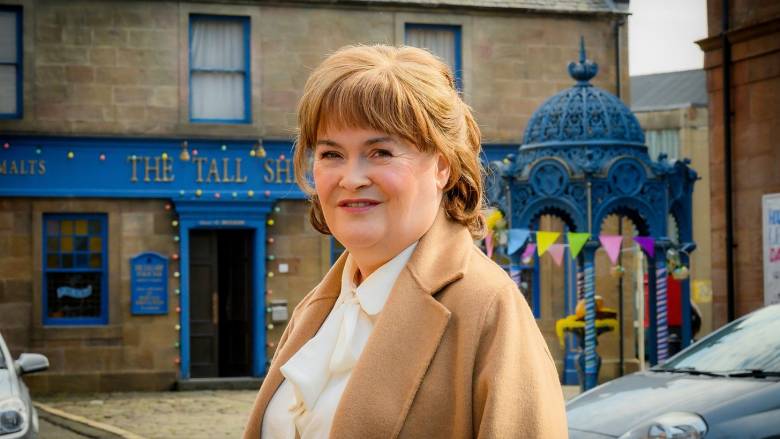 This week in Shieldinch… a frantic Suzie is stunned when celebrity guest Susan Boyle arrives to model for her charity calendar; Bernie and Mick Mulvaney face the truth about their complicated past; and while Scarlett comes face to face with her past, Tyler Foulkes is back in town.

With time against her, Suzie tries to assure benefactor Duncan Campbell-Baxter that the charity photoshoot will be a success. But with tensions rising Suzie begins to panic, and it’s down to Sonny to reassure her all will be well.

Unimpressed the mystery guest is a no-show, Duncan makes his disappointment known to Suzie, who frantically tries to salvage the situation.

After an eager wait, Suzie is stunned when singer Susan Boyle arrives to take part in the photoshoot – much to the delight of superfan Duncan.

Elsewhere, Bernie barely keeps her emotions in check, unsettled by Mick Mulvaney’s presence. Confronted by her past, Bernie learns that Mick has lived a life of regret, leaving her heartbroken.

Scarlett is spooked when she meets Duncan Campbell-Baxter, instantly recognising him from her past. She goes out of her way to avoid him, hoping Duncan’s Shieldinch visit is short-lived.

Tyler is back, and shocked to see Darren and Nicole have grown close. Suspecting his brother has feelings for Nicole, Darren toys with Tyler. Sensing Tyler has changed since he’s been away, Nicole warms to him, but is stunned when he warns her not to get too close to his brother.

As a nervous Ellie awaits the results of her latest scan, she’s shocked to discover Kim’s pregnancy news. As her emotions waver, Roisin fears Ellie’s more fragile than she’d like to admit.