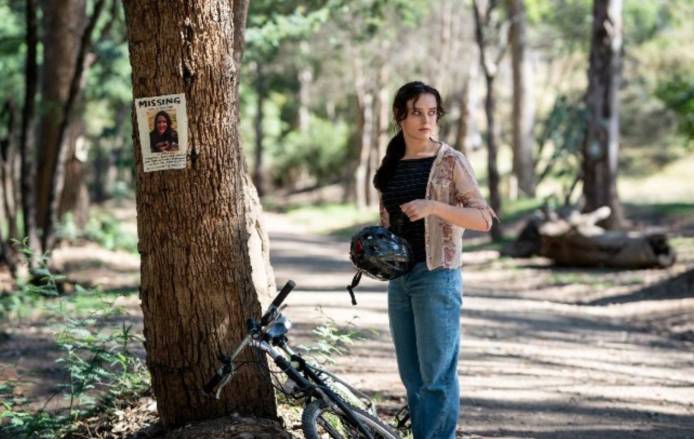 Bill (Robert Grubb) and Rachel (Virginia Gay) question Salim at the refugee quarters (Osamah Sami). Laila (Haya Abbas), who is leaving, arrives home. Her return hasn’t made her family ecstatic though. When she describes her trip to Melbourne, they learn that Hugh was merely assisting her and that their relationship wasn’t as close-knit as they had thought.

When Joel (Mark Coles Smith) tries to get Miki (Katherine Langford) back together, she is preoccupied with finding the truth about Hugh’s death and clearing her name.

Daniel Henshall’s character, Kevin, is getting ready for the arrival of the prospective buyers. While he shows them around, Rachel and Bill investigate the anonymous text message and search the meatworks lockers, but Miki is just in time to discover what has been planted in her locker.

Laila pays her a visit to Colleen (Jacqueline McKenzie) to tell the truth about her and Hugh’s relationship. Later, feeling relieved and reflecting, Colleen becomes more receptive and at last acknowledges her son Adam’s (Jack Kenny) relationship with Ranil (Amesh Edirewerra).

Miki almost has her secrets exposed when a police officer randomly searches her home, but Lynne (Nadine Garner) is able to hide the evidence just in time.

Set in regional Victoria, the compelling six-part series Savage River is an intriguing murder mystery. When Miki Anderson returns to her hometown in rural Victoria after 10 years in prison, she’s determined to finally move on with her life. But the close-knit community of Savage River is not about to let her forget the past that easily. When a murder rocks the town, Miki immediately becomes the focus of everyone’s suspicion. With the police closing in, she sets out to prove her innocence, uncovering long- buried secrets that will cast doubt on everything she thought she knew.