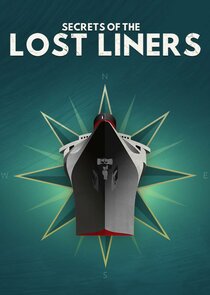 Rex: The Rex, a symbol of Mussolini’s dictatorship, set numerous technical records and introduced a new standard of luxury at sea. Why was she attacked by the Allies despite avoiding being converted into a troop ship and being hidden in comparatively safe locations throughout WWII?

Secrets of The Lost Liners is an in-depth marine history series charting the design, service and loss of some of the world’s greatest ocean liners. From art deco icons, luxury floating palaces, to national symbols, this six-part documentary covers 100 years of extravagant ships that pushed the boundaries of engineering and design, but which, one by one, were tragically lost through conflict, accident or human error. With unprecedented access to experts and historians, and never before seen footage, Secrets of the Lost Liners will uncover each ship’s storied past. Episodes include the Cap Arcona, the Queen Elizabeth, SS Rex, the Andrea Doria, the Normandie, and SS America.