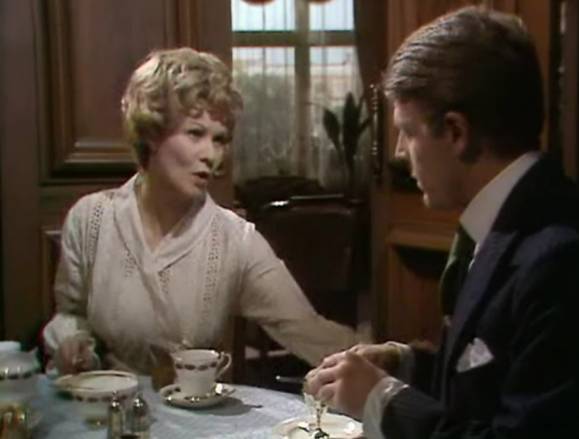 The Party’s Over is the final episode of anthology series Shadows of Fear and it’s a bit different from the other 10 episodes. It aired almost two years after the others for one thing and is only a 25 minute episode instead of the usual 50 minutes. Unlike all the others this was not set in the present day either, instead taking us back to the 1920’s.

When the story begins John Parker is disturbed to discover that his young wife Ethel has a heart condition. We very quickly learn that Parker is not the loving husband he first appears. He is having an affair with a young woman called Julie and seems almost gleeful that his wife could die at any moment.

In fact in best Gaslight fashion it seems as if John is trying to scare his wife into having a heart attack. In an excellent twist the boot is on the other foot and Ethel sets a trap for John (she lays a tripwire across the stairs and when he takes a tumble in the middle of the night it looks like he has broken his neck) because she is also embroiled in an affair with her doctor and doesn’t even have a heart condition. The twist turns again though as John isn’t actually dead at all but we are left in no uncertain terms that Ethel soon will be….

The half hour format works really well actually, a bit like similar series The Frighteners, the plot doesn’t have time to get bogged down and the story is better for it.

Series: Shadows of Fear Episode 11 of 11

Ancient Ice Zombies: Visits to the most remote, cold and inhospitable places on the planet to reveal great mysteries that...

Deadly Disposal: This series explores some of the most startling criminal cases of the past two decades where technology has...

Tony McCluskie: The case of Tony McCluskie, who made headlines across Britain when he was revealed to have slaughtered his...

A Greek Tragedy: As the Housewives react to Tanya's early departure, all efforts are made to make the most of...

David and Helen: Davina McCall and Nicky Campbell present the stories of people who were abandoned as babies, helping them...

Baked Beans Update: Gregg Wallace catches up with the Heinz baked bean factory in Wigan, which has upped production to...

The Royle campervan hits the North-East, to experience the Angel of the North, a working coal mine and glass blowing...

Trowbridge: Charlie Dimmock and the Rich brothers head to in Trowbridge, Wiltshire, to help Jacqui and Yung, who have never...