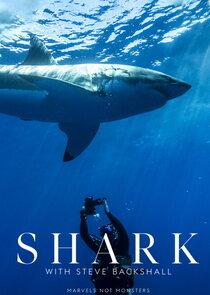 Scientist Steve Backshall explores some of the more than 30 shark species that live in the British Isles to demonstrate how these enormous fish are just as amazing and enigmatic as their relatives found throughout the world.

Along the way, he dives with his all-time favorite shark, the blue shark, off the coast of Cornwall and comes across a four-ton basking shark in the Scottish Hebrides.

In Wales, he also meets researchers and environmentalists who are dedicated to preserving endangered species.

Shark with Steve Backshall is a revelatory series that celebrates the wonder of sharks and dispels the myth of sharks as cold blooded killers. Steve Backshall, a naturalist and shark expert, gets us closer to sharks, revealing a diverse and incredible family of over 400 different types.

This global journey will travel from the freezing water of Alaska, to the tropics and down into the depths of our ocean.  Teaming up with cutting edge scientists, Steve will make discoveries, from glow in the dark sharks, to sharks that walk on land, to ancient sharks over 500 years old.

Now more than ever this incredible family needs our help.  Every hour we lose over 11,000 sharks to overfishing, shark finning and habitat destruction.  Steve will confront the uncomfortable truths and join shark advocates across the globe to help turn the tide for sharks.  Coming eye to eye with this feared yet misunderstood predator, Steve will reveal sharks in a brand new light.