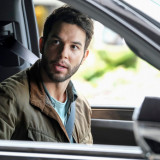 Co-Pilot: Todd and Margaret work on two cases that at first glance appear to be unrelated, but they soon realise that Todd’s hysterically dull civil case contains a crucial detail that could aid Margaret’s high-profile client.

So Help Me Todd follows Todd, a talented but directionless P.I. who is the black sheep of his family. Despite their opposing personalities, he agrees to work as the in-house investigator for his overbearing mother, Margaret, a successful attorney reeling from the recent dissolution of her marriage.