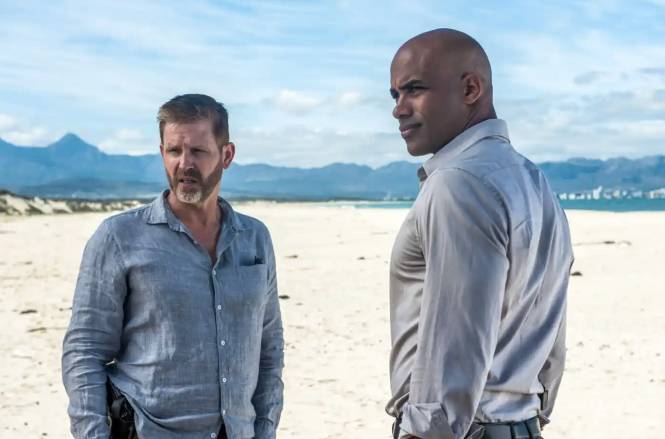 Six part 2016 South African crime drama Cape Town, which is based on the novels by Deon Meyer, premieres on Acorn TV on 22 August.

As the series begins Captain Mat Joubert of the Cape Town Police was once the best and was admired by the department for cracking every case. But that was a year ago, before his wife Lara was killed while doing undercover work, and Mat has since been on a downward spiral, plagued by his hazy past and unsure of how he was unable to save her. Mat is now an out-of-shape chain smoker who has mixed feelings about the violent neighbourhood in which he lives. But he must now act since a new colonel wants all police officers to be fully physically and mentally prepared.

When Sanctus Snook, a former colleague of Lara’s, is assigned as Mat’s new partner, Mat immediately and instinctively dislikes the sleek ex-elite cop and finds it difficult to believe the pairing is a coincidence. But the two unlikely partners find themselves in the middle of a high-profile murder investigation when a wealthy businessman is discovered dead while wearing an Albert Einstein mask. They realise they are pursuing a serial killer when a second body is discovered wearing a different mask.

Gradually, Mat begins to overcome the ghosts of his past, but as he uncovers each layer of the investigation, he must re-live his wife’s murder to stop the violence. Based on the bestselling crime novels of Deon Meyer, Cape Town stars Trond Espen Seim, Boris Kodjoe, Arnold Vosloo, Axel Milberg, Marcin Dorocinski, Jessica Haines and Isolda Dychauk.

All episodes from the first season will be available from 22 August 22.