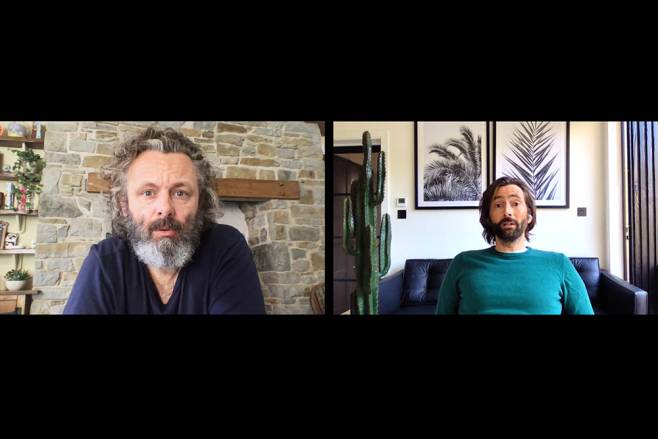 On November 24, the third season of STAGED will make its exclusive debut on BritBox UK along with the first two seasons and a series special. The critically acclaimed series, which stars David Tennant, Michael Sheen, Georgia Tennant, and Anna Lundberg, will be back on our televisions with some holiday cheer and its customary healthy dose of squabbling. Created by Phin Glynn and Simon Evans.

David Tennant and Michael Sheen (playing themselves) were due to star in a production of Six Characters In Search Of An Author in the West End. The pandemic has put paid to that, but their director (Simon Evans – also playing himself) is determined not to let the opportunity pass him by. He knows how big a chance this is for him and turns his attention to cajoling his stars into rehearsing over the internet.

The second series sees the pair attempt to navigate their ‘new normal’ at home with their increasingly exasperated families whilst simultaneously trying to tackle the world of ‘virtual Hollywood’ and their ever more fragile egos. Also returning for the new series is Lucy Eaton alongside Nina Sosanya and Simon Evans with new addition to the regular cast Primetime Emmy-winner Ben Schwartz, playing the assistant to Michael and David’s American agent.

The Staged Special features not only mistakes and outtakes but it also shows how the show itself was found. From experiments in how to film the show to playing with the idea of who and what the characters would be, it’s a unique look back at a unique show produced at the most unique of times.

Things have returned to normal for David and Michael. They have moved on from lockdow and returned to their everyday working life, while Simon’s career remains stagnant. His phone does ring, but only to ask if he can get David and Michael back together; and they’ve made it clear they want nothing more to do with him. But Christmas is approaching, and Simon hopes the warmth of the season might soften them to the idea of a radio version of a Christmas classic…but that’s as far as Simon’s plan has got!