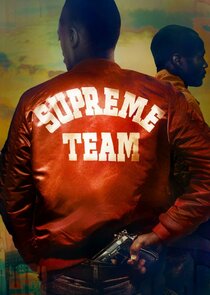 War & Peace: The Supreme Team was at the top of their game: they were revered by the nation’s growing hip-hop scene and made untold sums of money as the crack epidemic spread across the nation. But President Bush and Mayor Giuliani both took notice of the murder of an NYPD officer in South Jamaica. The Supreme Team and drug dealers were subjected to a swift and harsh application of the law, changing the face of policing as we know it today not only in New York but across the nation.

A three-part limited docuseries that takes an in-depth look at the notorious Queens, New York gang, and tells the real story from the mouths of its two leaders and family members, Kenneth "Supreme" McGriff and Gerald "Prince” Miller.