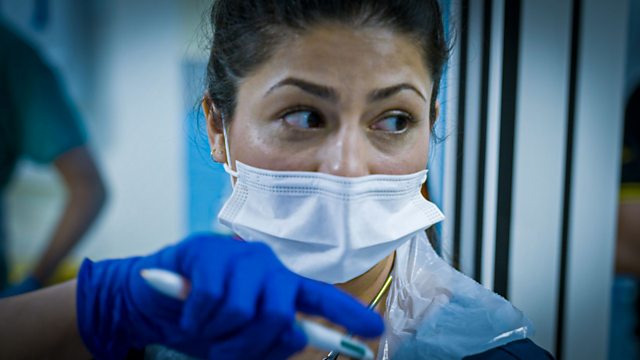 The major trauma team in Addenbrooke’s are up against the clock to treat some of the country’s most critically injured patients. Chef Adrian is rushed to hospital in the early hours of the morning after crashing his motorbike at high speed, trapping his arm between the crash barrier and impaling his abdomen with a piece of metal. Having lost a third of his circulating blood, Adrian is in a critical condition when he arrives in the trauma department’s resus bay with potential internal haemorrhaging along with the threat of losing a limb.

Led by Dr Mariam Imam, a specialist major trauma team rapidly assembles to assess the external damage before Adrian is sent to CT to see if the metal has pierced any vital organs. The scan very quickly rules this out, so all attention turns to his arm and hand, which are so badly mangled that his hand is potentially beyond repair. Emergency surgeons assess the arm and rush Adrian to theatre so that consultant plastic and hand surgeon Alex Reid can explore the extent of the damage. After determining that there is decent blood supply to the hand, Adrian’s limb is stabilised until he can undergo further surgery.

Forty-eight hours later, Adrian is brought back to theatre with consultant plastic and hand surgeon Ian Grant. He and his surgical colleagues must decide whether they can save Adrian’s hand.

Back in the emergency department, the major trauma team prepare for the arrival of another injured patient, a 25-year-old man transferred to Addenbrooke’s from hospital in Colchester. Cawley has been assaulted and after hitting his head on the pavement has a life-threatening bleed on the brain. Having been assessed at Colchester, Cawley was put in an induced coma to control the build-up of pressure within his brain and then transferred to Addenbrooke’s, which has the trauma specialists he needs for treatment.

At Addenbrooke’s, the on-call neurosurgical team, with consultant Angelos Kolias and senior registrar Harry Bulstrode, are on standby to perform an emergency craniotomy to remove the build-up of blood within Cawley’s brain.

Back down in resus, the red phone alerts the team of another incoming patient who has been involved in a head-on car accident. Thirty nine-year-old Sarah has been significantly injured in a high-impact collision which has left her with a broken leg and fractured c-spine. If Sarah doesn’t receive emergency care, the spine fracture could become dislodged and sever the spinal cord, leaving her paralysed from the neck down.

With an injury threatening the spinal cord, Dr Sarah Hazelman and a team of trauma doctors immediately arrange for a CT scan to assess the severity of the fracture. After seeing that the fracture is stable, priorities rapidly switch when the scan picks up that a shard of bone from her broken leg is pressing on an artery, which could lead to severe complications and the loss of Sarah’s foot if the blood flow is not quickly restored.

On-call trauma and orthopaedic surgeon Hassan Fawi has to act rapidly to reset Sarah’s leg and restore the flow of blood. Only then can the attention return to the fractured neck, which needs to be kept stable.

Two days after the accident, consultant orthopaedic spinal surgeon Doug Hay has to carefully rebuild the broken vertebrae in Sarah’s neck using a small piece of bone from her hip along with a titanium plate to secure the join. Without the operation, Sarah could become paralysed, but there is also a risk of causing permanent damage to the spinal cord during the operation itself.

Documentary series going beyond the theatre doors of Queen Elizabeth Hospital Birmingham, where surgeons push medical boundaries to the limits.