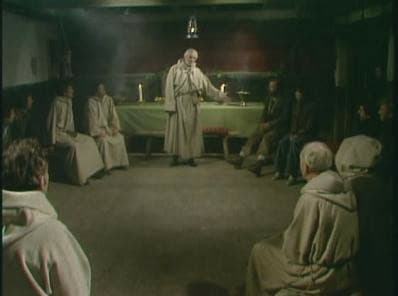 The Peacemaker: Charles, Jenny and Hubert arrive at a settlement based around a working mill. The community there has been influenced and led by former personnel headhunter Frank Garner (Edward Underdown) and Rutna, a young Indian woman. Their guiding principle is the belief that man died (during ‘the death’) and now needs to be re-born to a new way of life. Frank makes several failed attempts to speak to Charles alone and is clearly uneasy about something. When Charles, Jenny and Hubert’s horses are poisoned with yew branches they have no choice but to stay another day…