We are firmly in Dead of Night/Magic territory with I Can See Your Lips Move when ventriloquist Harry Beardsley becomes convinced that someone is out to kill him. Things get murkier when Harry starts to believe its his own dummy Cedric.

The TV Times of the week had a nice three page feature on well known ventriloquists (and their dummies of course), Peter Brough (and Archie Andrews), Albert Saveen (and Daisy May), Arthur Worsley (and Charlie Brown) amongst them. Most of them came across as somewhat eccentric and slightly obsessive about their dummies. In fact Arthur Worsley was sure his dummy Charlie could make gags up for him if he got stuck. All of them felt though that it was getting harder and harder to make a living with their acts. 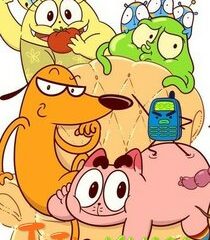 The Dishwashing Duel: Tata and Kuma have different ways of enjoying a late lunch that is prepared on a holiday,...