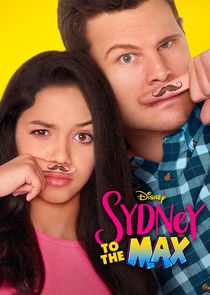 Cool Intentions: When Max goes away for the weekend and leaves his mother in charge, Sydney takes advantage of her "cool" grandma by arranging a sleepover on a Sunday night. In the '90s, Judy believes Max broke something even though he keeps denying his involvement.

Sydney to the Max centers around the experiences of a sociable, goodhearted middle schooler named Sydney Reynolds and her protective, doting – and sometimes clueless! – single dad Max as they navigate the challenges of growing up. Set during two timeframes, decades apart, flashback scenes to young Max and his best friend Leo in the 1990s parallel many of the funny predicaments Sydney and her BFF Olive get themselves into. VHS camcorders, bleached skater hair and other '90s-defining "relics" aside, Sydney and Max come to realize, aided by Sydney's kicky grandmother Judy, who's well-versed in Max's childhood antics, that they have more in common than either realizes.