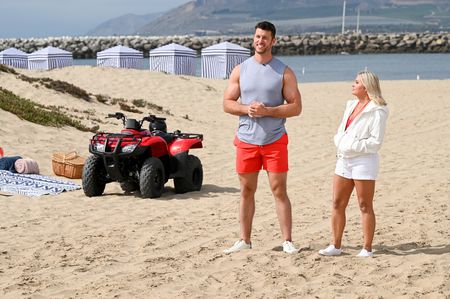 Following last week’s cliffhanger, Clayton confronts one of the women about a shocking rumor involving her, but will her explanation check out, or will Clayton break tradition and take back a rose? Later, Kaitlyn Bristowe pays a surprise visit, leading an emotional date where Clayton and the women bravely open up about their insecurities. Becca Kufrin stops by to plan an extreme scavenger hunt for the one-on-one date in downtown Los Angeles; and back at the mansion, one of the ladies unknowingly sets off a new set of drama dominoes when she cooks the house a shrimp snack. Then, it’s time to kick up some sand when former “Baywatch” star Nicole Eggert takes the second group-date ladies through some romantic lifeguard training; but when the date doesn’t end as expected, one disappointed woman is ready to make waves yet again. Will Clayton reward her efforts to protect him by giving her the group date rose or be pushed to his limits?

The 22 women who will vie for Clayton’s heart are the following:

The Bachelor is an American dating and relationship reality television series, revolving around a single former bachelor, who starts with a pool of candidates from whom the bachelor is expected to select a wife through an elimination process.