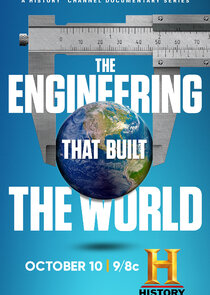 Liberty Rising: A little-known 19th Century French artist embarks on an impossible 20-year odyssey to build the tallest statue in the world, and erect it on U.S. soil. His 225-ton colossus known as "The Statue of Liberty" will not only become the ultimate emblem of American identity, but will go on to change the way tall structures are built.

The Golden Gate Bridge. The Panama Canal. The Transcontinental Railroad.  Iconic structures that have shaped and defined our nation and our world. The Engineering That Built the World tells the stories of the brilliant visionaries behind the most epic builds of the past two centuries. Against insurmountable challenges, these are the unknown tales of rivalries, egos, backdoor politics and the brilliant innovations behind iconic feats of engineering that made the future possible.