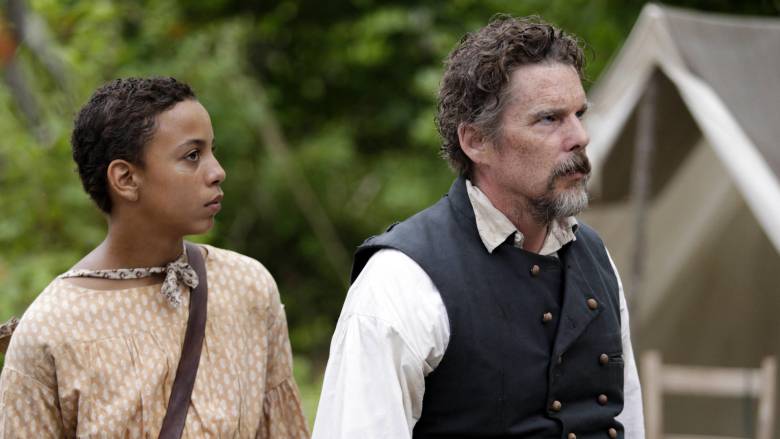 Meet the Lord: Henry Shackleford, a young slave living in the Kansas territory in 1856, has a run-in with abolitionist John Brown, who mistakes him for a girl and promptly "frees" him. Believing Henry to be his good luck charm, Brown welcomes him into his ragtag army and nicknames him "Onion." Donning a dress for the first time while dodging bullets, Onion quickly awakens to the life or death stakes in the battle over human bondage and witnesses Brown’s divinely inspired violent agenda: to free the land of slavery by any means necessary.

Starring and executive produced by Oscar nominee Ethan Hawke, who plays the controversial abolitionist John Brown, the seven-episode series is from Blumhouse Television and based on the National Book Award-winning novel The Good Lord Bird by bestselling author James McBride.

THE GOOD LORD BIRD is told from the point of view of Onion (Joshua Caleb Johnson), a fictional enslaved boy who becomes a member of Brown’s motley family of abolitionist soldiers during Bleeding Kansas – a time when the state was a battleground between pro- and anti-slavery forces – and eventually finds himself participating in the famous 1859 raid on the U.S. Armory at Harpers Ferry. Brown’s raid failed to initiate the slave revolt he intended, but was the event that started the Civil War. THE GOOD LORD BIRD weaves a humorous, dramatic and historical tapestry of Antebellum America, spotlighting the complicated and ever-changing racial, religious and gender roles that make up the American identity.