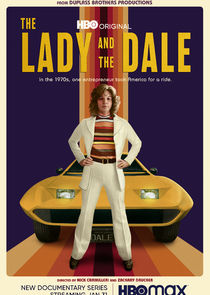 Soldier of Fortune: Transgender entrepreneur Liz Carmichael is exposed as a fugitive who has been evading authorities for decades alongside her wife and five children before her friends and family explore her chaotic and peculiar life before things go badly.

The Lady and the Dale traces the story of Elizabeth Carmichael, who rose to prominence when she released a fuel-efficient three-wheeled vehicle during the 1970s gas crisis. As she wins over major carmakers and investors, a web of mystery unfolds regarding the car’s technology and Carmichael’s surprising past. A portrait of an extraordinary entrepreneur’s rise and eventual fall, the series explores a one-of-a-kind story of fraud, family, and identity.