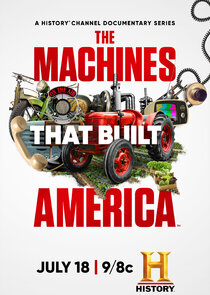 Titans of Television: In the 1920s, the idea of beaming moving images through the air is pure science fiction. Most people find entertainment in books, magazines, or theater. But two daring pioneering see a different future, where people sit in front of screens, dazzled and engaged by what they see. To dominate the burgeoning market, a ruthless mogul takes on a little-known inventor in a high stakes battle that will change the world forever. Can a rugged farm-boy topple a big-city titan with endless resources? With millions at stake, it's a bitter feud, as both men jockey to claim the title: "The Father of Television.

TV. Radio. Phones. Airplanes. Motorcycles. Tractors. Home Appliances. Power Tools. These are The Machines That Built America. This docuseries reveals the surprising stories and rivalries behind the ground-breaking innovations that turned America into a superpower. Blending dramatic reenactments and archival footage with interviews from experts, biographers, and others, The Machines That Built America brings to life some of America's most storied inventors: Nikola Tesla, William Harley, Alexander Graham Bell, Duncan Black, Alonzo Decker, and many more. In eight episodes, viewers will meet these larger-than-life characters, inhabit their rivalries, and ride the rollercoaster of triumph and failure as they search for a breakthrough that will change humanity.